I was really excited to attend the inaugral SheHacks 2014 hackathon in Sydney, organised by the lovely women from Girl Geeks Sydney – Georgi Knox, Denise Fernandez, Kris Howard, Sera Prince McGill and Peggy Kuo. It was held at Google’s offices in Pyrmont and was a fantastic event! (SheHacks was running in parallel in Melbourne too, so you can check out a rundown of the Melbourne event by Tammy Butow.)

It was the first hackathon for quite a lot of people, and it was great to see people getting involved in an event they might not otherwise attend.  Tickets for the event were sorted into several types:

People were encouraged to form teams of about 5 people – 3 developers, 1 ux person, and one non technical – with the goal that your devs can build, the UX person makes it look amazing, and your non-technical person can coordinate and concentrate on your presentation (following excellent advice laid out by Kris just a month ago on presenting your hackathon project.)

I was also amazed at the generous catering – pizza, caffeine, snacks, lots of cookies made by team mate Denise, and a decidedly un-male breakfast spread of yoghurt, muesli and fresh-cut fruit!

The result? 50 women in 11 teams competed for some great prizes donated by Google, Atlassian, Microsoft and Razorfish. There were some fantastic team hacks presented, and I personally enjoyed:

HOWEVER… our team of Denise Fernandez, Luciana Carrolo, Kim Chatterjee, Anna Zaitsev and myself won first prize with our “Mission Possible” app!! The site is designed to connect volunteers with coordinators to assist with disaster relief. The amazing prezi designed by Anna and Kim describes the idea in detail.

The source code is available on GitHub. The app was designed to be realtime so that volunteers can see up-to-the-minute information about where their help is needed, and in our demo we used two screens to great effect (realtime updates are always a crowd pleaser!). It was written using node, socket.io, handlebars, google maps, twitter bootstrap and a lovely set of custom icons designed by Kim.

A screenshot from our app shows a shaded area where the “disaster” has occurred (an oil spill), and a point which is the muster point for volunteers to go to to help (save the penguins!). Everything updated in real time from a master coordinator, who would add extra muster points and specify numbers of volunteers that should be at each point. 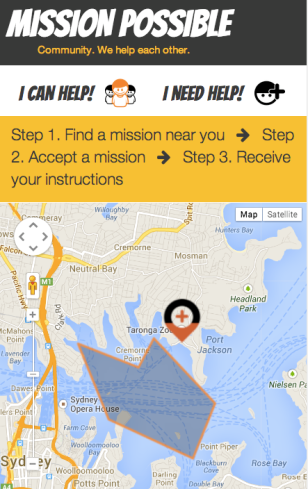 Our prize was a Nexus 7 tablet and a 3D printed trophy, which was a pink computer.

I was pretty happy with the outcome of that! It’s the third hackathon in a year that I’ve participated in and won prizes for.  I really love the energy and creativity that comes out of such an intense situation, and it’s a lot of fun to see what everyone else does in such a short time as well.

Thanks very much to Girl Geek Sydney for a great event!

I'm a software engineer working at Amazon in Seattle.

I love to travel, cook, hike, and learn new things. Software Development happens to be a fantastic way to fund it all! You can read more about me here.